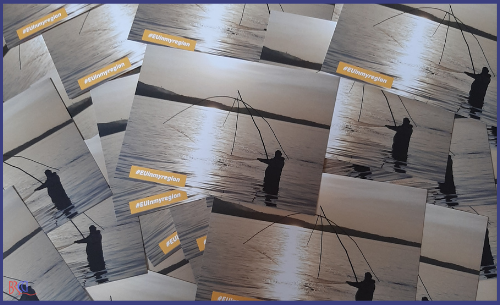 A photo by the Bulgarian-Romanian Chamber of Commerce and Industry from project „Memofish“ was rewarded in a postcard competition, hosted by the European Commission. The postcard will be distributed all over Europe and will be part of the visual messages for the #EUinmyRegion campaign, which promotes the contribution of projects with EU financing for changing the cities and regions. The card can be seen at the webpage of the Interreg V-A Romania-Bulgaria program, which finances the project.

The awarded picture with a fisherman from Oltenitsa illustrates one of the older, but unforgettable ways of fishing - with a rectangular net, which is hung from a hanging structure. The picture was taken at the outfall of the Arges river. It was taken by Ventsislav Petkov. This is only one element from the hundreds of materials – pictures, film, video and audio recordings, texts, clips - which were created within the unique audiovisual study of the cultural heritage of the fisheries communities in the Bulgarian-Romanian region.

All products of the strudy are available at  the website and can be used, free of charge, by all organisations and companies, which are encouraging regional tourism.

Among the BRCCI partners in the implementation of the „Memofish. Memory and future. Stories about the Danube civilization“ project are Association „Paralel–Silistra“, the Ruse Regional Museum of History, Association Access - Calarasi, as well as FLAG “Dunarea Calaraseana”.

What is new on taxes and social securities in Bulgaria

Bulgaria as a new nearshoring destination